What is Server Assistant & AVC DLL?

Server Assistant is an administrative utility created for Half-Life. The project was discontinued in 2003 and the source is now available for free download. 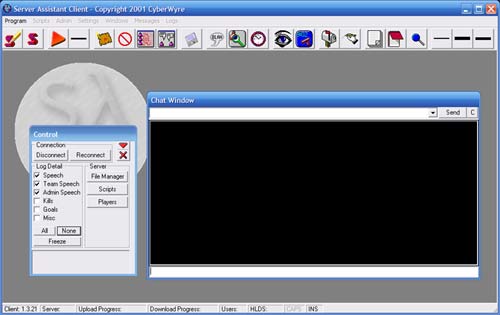 An older version of the SA Client, with live data (Click image for full size):

Server Assistant (SA) allowed remote control and administration of a Half-Life server by a team of administrators, each with different levels of access. SA allowed monitoring of game chat (and even speaking with the players). A low-resolution top-view picture of each game level was automatically created, and the individual positions of the players in the game were displayed on it. You could move players around by clicking and dragging the icons.

SA handled many server tasks automatically. For example, it would allow players to vote on the map they'd like to play next.

SA could automatically handle problem users, with a comprehensive banlist, as well as automatic banning of people who used reserved names. It was also possible to program a list of approved members for a specific clan, and to then remove the clan tag from players' names who were not on the list. This feature also provided automated "joining" of the clan if the appropriate password was known. Problem users could also be kickvoted by the players in the game, in case an admin was not around. The "RealPlayers" system would keep a comprehensive database of players based on their Unique ID's, and would identify problem users if they joined under alternate names in an attempt to cause trouble. This system also allowed problem players to have certain priviledges removed, such as the ability to vote in a kickvote. Also, the names of regular players could be protected and reserved only for their use. SA would also prevent spamming of links or annoying phrases by kicking users who overused a chat line.

SA would automatically generate web-based log files of server events and discussion, including kills and chat. These logs were coloured by team and easy to read. The SA client also featured a full file manager, with uploading and downloading of files available to priviledged administrators. Admins weren't bored at all when using the SA client -- there was an admin-only chat, a shared whiteboard for discussing ideas visually, and several multiplayer games like hangman, tic-tac-toe, and battleship.

There was also an "AutoAdmin" who would talk back when spoken to, issuing snarky responses and kicking insolent users.

To sum up, Server Assistant was a tool to run your server. It handled the minutae and made it easy and enjoyable to run a server.

The AVC DLL is an add-on DLL for Half-Life's mod Team Fortress Classic, adding tons of amazing features and functions. It is included in the download.

First, the DLL adds support for some of the operations required by SA, such as player positions and teleportation. But it doesn't stop there. New weapons are added, such as the snowball throw, the laser tripmine, and the snark. There are several admin-only guns like the BFG and the Entity Mover gun (possibly used as inspiration for Half Life 2's Gravity Gun).

Tons of fun new things added, like clocks that tell the real time, cameras, radios, model changing, lightshows, and much much more.

When I get time, I will add screenshots and videos of some of the mods, but for now, you may download and try to get it to work.

Check out the AVC command reference and my lightshow keyboard configs

One of the features that the AVC DLL allowed me to do was create real-time lightshows to prerecorded music or live streams. Check out the Lightshows page to learn more!

The source code to Server Assistant and the AVC DLL is protected by the GNU GPL. This basically means that if you modify it and compile it, you MUST release your source code changes onto the internet. If you do not agree with doing this, you are in violation of the license and you should not download.

The source code and downloads are now available on GitHub and have been updated to work with Steam as of Aug 1, 2017.

These downloads are no longer recommended as they are out of date and do not function:
Original 2003 release: sa-source.zip (6 mb)

You may also be interested in the SillyZone model, sound, sprite, and other files pack. This version is the only one I could find, dated September 28th, 2002. I'm pretty sure there are newer ones, so let me know if you are missing any files.
sz9-28-2002.zip (22 mb)