The Remote Control Watch is a simple device, really. It's actually a WristLinx Radio Watch made by XACT. Specifically, it's the X33XIF WristLinx Two-Way Wristwatch Radio.

Watch a video of the watch in action:

What a great joke! Fungi! Hahaha, I'm in stitches. When's the last time your watch told you a bad joke? 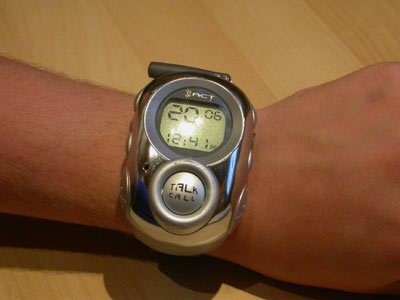 I got two of these babies, with chargers and batteries, on eBay for about $50. A great deal! It's a good thing that the package came with two, since I always forget to plug the watch into the charger at night, so it's dead by morning. I just switch to the second one, and everything works great!

What is it, exactly?

It's an FRS/GMRS radio. If you don't know what that is, well, it's basically a radio protocol intended for non-commercial local use by civilians. These watches are intended to be toys, so the range isn't that great. It works great for my needs, however.

So essentially, my setup involves the following: The watch, a second radio, and some computer software. 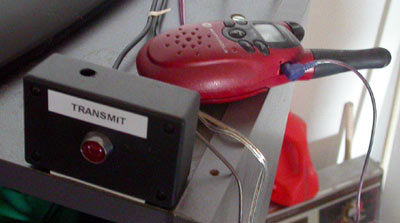 This is the second radio. It's simply a cheap Motorola GMRS radio, designed to take 3 AA batteries. Instead, I simply wired 4.5 volts of power directly into the battery compartment. I cut up a 3-conductor headset cable and connected it to the headset jack of the radio. This then runs into a custom-made circuit box, shown in the picture with the word Transmit labelled on it.

The Transmit Box performs two functions: First, it patches the audio into standard 1/8 inch headphone connectors. These are then plugged into the computer sound card. Secondly, the Transmit Box actually triggers the radio to transmit. When power is applied, the Transmit LED lights, and a relay is closed, connecting the microphone with the computer. This triggers the radio to transmit. Once the power is removed, the transmission ends. 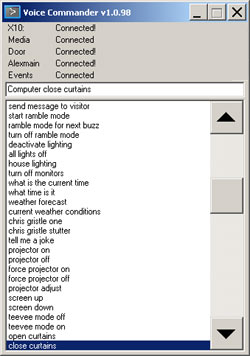 The backbone that makes the Watch work is the Voice Commander software. This is a simple application that uses Microsoft's Speech API's to do voice recognition and to talk back with Text to Speech. It runs on the same computer as the Touchscreen, and it's interface is normally not seen. It is entirely voice driven.

It works this way: The computer listens constantly on the sound card input connected to the radio, waiting until it hears something that sounds like a command it knows. When I speak into my watch, the computer picks up that I said a command. It executes the command and begins transmitting on the radio, telling me that the execution was successful, or otherwise providing information (if I asked for it).

Great. So what can it do?

Glad you asked! Here are just a few of the things I can do, simply by speaking into my watch. ... and much more. The Watch is my wireless connection to my home, and it only requires my voice.
copyright © 2022 AvBrand.com - sitemap