I have a large number of lights and applicances in my home. Many of these are ceiling lights. My ceiling is 13 feet above the floor... Turning them on and off without getting a ladder would be difficult, and running tons of wire to every part of my home to control them would also be annoying. So, I turned to X-10 Home Automation technology. But of course, I could never be satisfied with just the bare bones setup -- I have to go the extra mile!

I try to make my home as smart as possible. In a few places, you'll find motion sensors like the one shown on the left. One such place is the kitchen. I don't spend a long time in the kitchen, but due to the arrangement of my home, the kitchen is always pretty dark, even in the middle of the day. So, I set up this sensor. When you step into the kitchen, the sensor sees you and turns on the lights. A few minutes after you leave, the lights go out again. It's so simple, and yet so wonderful. I don't even have to think about it anymore!

Watch a video of the kitchen lights here!


Pretty much all of the lights in my home are automated. Check out the Touchscreen to see a diagram of where they all are, and what they are called. However, the automation does not stop there! That's much too simple.

One of the most useful additions to my home is this automated curtain controller: 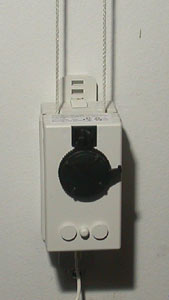 I bought a "Traverse Rod" for $20 at a local hardware store. It's a good thing I now know that a curtain rod with pull-cord is called a "Traverse Rod", because that information would have been very handy earlier. Anwyay, I ordered the cheapest electronic drapery controller, model 3142, from SmartHome. This unit is excellent (if a bit noisy), and very strong. I learned that the hard way, when it ripped my new Traverse Rod off the wall. Several times. Not fun - make sure you set it up right!

Watch a video of the curtains in action, right here!


But just having automated curtains is not enough. It has to be more! So now, the curtains are controlled by computer, as follows: 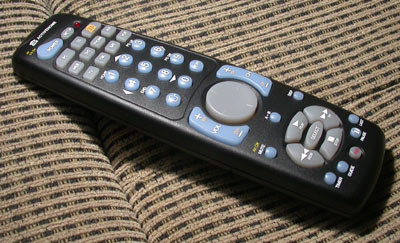 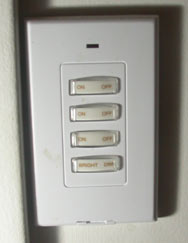 Thanks to the versatility of X-10, I can use a number of wireless remotes to control my home. Pictured above left is the X-10 MouseRemote, which lets me control my lights, but also controls my Media Center. On the right is a stick-on wall switch, which gives instant control anywhere in your home, without ripping open the walls.

How often have you been sitting on the toilet, and a really terrible song comes on the playlist? Or maybe it's just too quiet and you need some music? What if someone chooses just that moment to push the visitor doorbell? The answer is clear. Install a controller remote right next to the toilet! 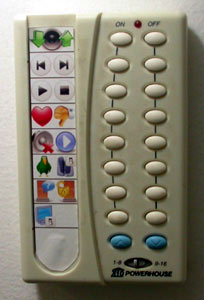 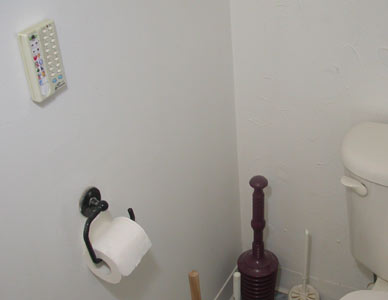 This remote has functions to control my music and media, and to identify visitors and let them in to the building. It's really handy to have this mounted to the wall. Sometimes, I'm in the shower, and a song I don't like begins. I just reach around the corner of the stall and press "Thumbs Down"!

Bringing it all together

So what makes it work? The answer is in one bland white box: 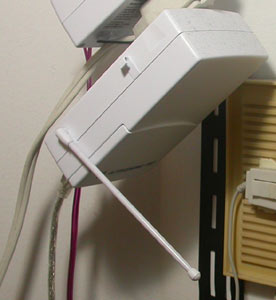 The X-10 ActiveHome Pro unit. It's a standalone home control computer interface unit, but can also be used as an active controller and interface. It's like, $50 or something, which is a great deal!

Why is it mounted in such a strange way? It may look stupid, but it's that way because that's how it gets the best reception from the various RF remotes and sensors throughout my home.

The X10 ActiveHome Unit is nothing without software on the computer to make it work.

This is the ActiveHome PowerLink software I have written. Its purpose is to connect to the ActiveHome device via USB, and provide an interface to it for other AvBrand software via TCP connection. It also keeps track of the status of the various modules, and keeps a buffer so that commands don't overlap each other. This application runs in the background of the same computer that runs the Touchscreen.

As you can see, there are currently 4 clients connected to this application. Every time a light changes status, PowerLinc will send a notification to each of those clients.

What good is Home Automation if you can't schedule things? There's something missing here. EventMachine.

EventMachine is a piece of software I wrote that handles things like scheduled events, macros, and a bunch of other stuff. For example, let's take a look at the event named "7:30 AM - Turn Radio On". 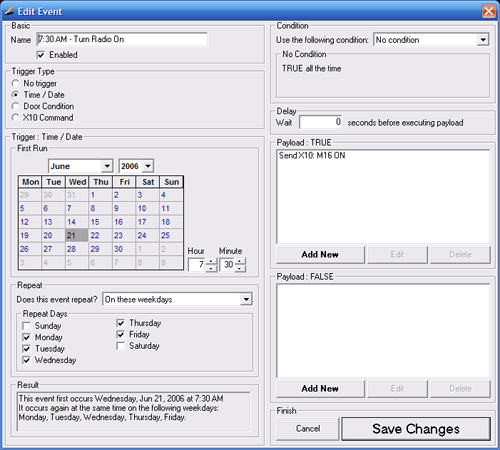 An event is comprised of three parts:

In this example, we can see that the event is triggered at 7:30 AM on weekdays (not weekends), has no condition, and it's payload is simply to turn on "M16", which happens to be the code of my alarm clock radio.

EventMachine is a powerful application which allows macros such as this one to be created without any programming know-how.